By John Slater on June 30, 2008 in Branding, Design, PlanetMozilla

Now that Firefox 3 is out the door, it’s a good time to look ahead to some other projects, like our mobile efforts.

At the request of Doug Turner and the Mobile team, I worked with Nobox to create a logo they could use in a variety of spots during the Fennec development process. (Big caveat: this logo has nothing do to with the final Firefox Mobile branding.) The result looks like this: There’s also a significantly simplified version that will be used in spots where the fully rendered one won’t work. The inspiration for both was an actual Fennec fox, although the image had to be toned down a bit so as not to overwhelm the cuteness filter on most handheld devices. This logo has already popped up in the header of the new about:mobile newsletter…keep an eye out for it coming to plenty of other places soon.

By John Slater on June 17, 2008 in Design, firefox, Mozilla.com, PlanetMozilla

Any piece of software as undeniably awesome as Firefox 3 deserves a pretty great vehicle for sharing it with the world. With that in mind, we set out more than eight months ago to completely redesign Mozilla.com, and I’m happy to report that, after a few hiccups, both the new site and new software went live together this morning. We’ve launched a new version of the Mozilla site with every major Firefox release to meet the changing needs of the product and our growing audience, and our goals for this latest edition were pretty lofty. As Firefox has matured into a mainstream product used by more than 170 million people around the world every day, we needed a site that could communicate the many benefits of Firefox 3 to people of all levels of Web expertise. To do that, we enlisted the Royal Order of Experience Design out of Chicago to help us blow up the old Mozilla.com and start from scratch.

I’ll blog about certain areas of the site in more detail over the coming weeks, but for now here’s a quick overview:
* A completely new look & feel. I blogged about this a bit already, and will do so more soon, but for now I’ll just quote our objective from the original design brief:
“The site design absolutely needs to embody our unique, unconventional and extremely un-corporate nature…while still being professional, informative and useful, of course. It should be clean, but not boring; modern, but not tied to any short-term trend. It should be friendly and accessible enough to communicate the details of a high-tech product without feeling cold and technical. It should convey our passion for and faith in the power and potential of the web. Lastly, it should have a sense of fun and playfulness – we’re serious about what we do but we don’t take ourselves too seriously.”
* A significantly expanded section devoted to all things Firefox. The main Firefox page (aka getfirefox.com) serves up different content depending on which browser you’re using (Firefox 2, Firefox 3, IE, Safari, etc).
* A detailed Firefox 3 features page, full of screenshots, illustrations and user-friendly copy explaining all the goodness.
* A short overview video aimed at explaining the high points of Firefox 3 to new users. (warning: beware of ninjas)
* In-depth pages describing Firefox 3 security, add-ons and our concept of “100% organic software.”
* A tips & tricks page with helpful hints for Firefox users of varying levels of expertise. (As I noted a few months ago, we’re always looking for more content here, so please share your favorite secrets!)
* New in-product pages to make sure the experience between the site and the software is as seamless as possible.
* A directory of other key Mozilla sites to give people a window into our world (think of this as the Yellow Pages for potential new community members).
* An expanded Press Center, complete with b-roll video, a downloadable reviewer’s guide and other goodies.
* A “What is Mozilla?” page to communicate the various nuances of the Mozilla Project and our mission to new users.

As with any project of this scale, there are literally dozens of people who deserve a big share of the credit, but I’d like to single out a few in particular:
* The Royal Order – Tim Hogan and his team have been our partners throughout the entire process and have consistently amazed me with their ability to not only translate some of my more esoteric design requests into reality, but to deliver a final result that was always much better than my own vision. Also, although many highly skilled design agencies either lack the interest or ability to get down in the weeds and focus on the little things, the Royal Order guys spent hours pushing pixels and working with our dev and QA groups to make sure all the details were exactly right.
* Delicious Design League – we asked them to create illustrations that would not only serve as the main visual element of the site, but would also somehow represent everything we like about the internet as a whole. Kind of a big task. Not only did they succeed, but they did it in a way that makes me smile every time I see their work. Incredible creativity from these guys.
* Steven Garrity & silverorange – a site is only as good as the people building it, and Steven and his team handled every crazy curveball we threw at them (and there were many) with skill and aplomb. Longtime Mozilla collaborators, they brought their contributions to a new level this time and delivered a site that really shows off some of the best aspects of the open Web.
* Stephen Donner – by my count, there have been at least 217 bugs filed as part of the redesign, and Stephen has been on top of them all. Without his dedication, attention to detail and all-around QA expertise there’s no way this project ever would have come together.
* Pascal Chevrel and our localization community – the work these guys have done is nothing short of astounding. Despite already having their hands full with things like Download Day and Firefox 3 itself, Pascal and his team found the time to localize more than 2,800 pages and 800 screenshots for Mozilla.com and its various international varieties. Think about that for a minute!

I’d also like to give shoutouts to Alix Franquet for helping with the video, features and tips & tricks pages; Elise Allen for her copywriting on the features page; Mike Beltzner for his input on the in-product pages; Wil Clouser for his all around web dev gurudom and Paul Kim for his overall wisdom and perspective. Plus, all the beta testers who offered their comments along the way. And, apologies to all the many worthy people whose names aren’t listed here…it was a true team effort all around.

Finally, if you’ve made it through this entire epic post, go download Firefox 3 and help us set a world record!

This is from the Internet Explorer team…yum. Thanks guys! 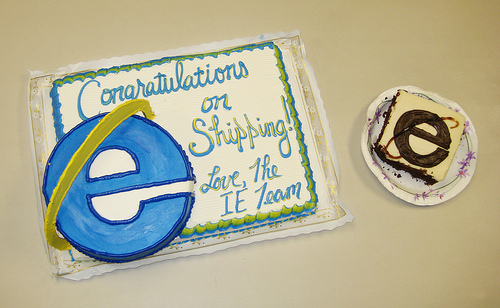 After the beta 5 release, it felt like we needed one final piece of robot artwork to really wrap up the entire Firefox 3 saga…something suitably epic and triumphant. So, in honor of today’s announcement that we have an official release date, I present to you: When I initially pitched the idea to Nobox, my concept was something like a triptych (quadtych?) that showed all the previous beta pages. Fortunately, they had the much better idea of combining the existing art with something new and even more grandiose, in the style of the classic Drew Struzan movie posters. From there, we ran with the movie poster concept, right down to the “Rated O for Open Source” tag at the bottom.

Big thanks to Jay, Hector and everyone at Nobox for all the creativity and expertise they’ve brought to this entire process. Finally, here are a few more random notes about the robot and what happens next:

* If you’re a fan of this art, we’ll soon be adding it to the Mozilla Store as a limited edition 18×24″ poster. More details on that to come…
* Our graphical design tricks were acquired from here
* For a behind-the-scenes look at the early stages of the poster, check out the initial concept sketch.
* Currently the www.firefoxvictory.com URL points to the main Firefox download page, but I have a few ideas for turning it into a more participatory robot-related site. Stay tuned!
* Lastly, here’s a Flickr set of the entire series of Firefox 3 robot art.